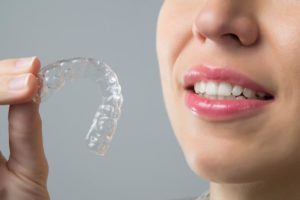 What is sleep apnea?

Sleep apnea is more serious than typical snoring. Obstructive sleep apnea, the most common type of sleep apnea, occurs when soft tissue blocks the airway of the throat and causes the patient to stop breathing during the night. Those disruptions in breathing can cause very serious consequences, as they prevent the brain from getting enough oxygen.

Who is at risk?

While sleep apnea can strike anyone, there are a number of factors that increase your risk of developing the disorder. Some of those factors include:

– Being overweight, male or over the age of 40.

– Disproportion oral features, such as a larger tongue or tonsils or a smaller jaw.

– A neck that is greater than 17 inches around for men, or 16 inches for women.

– Having a nasal obstruction such as a deviated septum.

– Suffering from allergies or sinus problems.

– Having a family history of sleep apnea.

What can Lodi Valley Dental do to help me?

First and foremost, it is important to discuss with your general practitioner what steps you can take to help prevent this serious disorder from causing you further harm.

Once that step has been addressed, ADC can help you alleviate some of your symptoms through the use of sleep apnea appliances, like the Silent Nite® sl and TAP® / TAP 3 TL appliances.

How do sleep apnea appliances work?

Sleep apnea appliances, like the Silent Nite® sl and TAP® / TAP 3 TL appliances, work by positioning the jaw to a more forward position so that the airway stays as open as possible while you sleep, preventing both snoring and obstructive sleep apnea.

For more information on how Lodi Valley Dental can help you with your fight against sleep apnea, give us a call today at (608) 592-4398.

Font Resize
Contrast
Accessibility by WAH
Call Us Text Us